Smoke in the Night 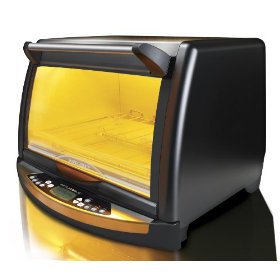 The other night, I had a bit of a harrowing experience.

I woke up in the middle of the night to the smell of smoke in my apartment. When I got out to the living room, I could tell that I wasn’t dreaming and the whole place really was filled with acrid, chemically smoke. I quickly tracked it down to the new Black & Decker InfraWave Speed Cooking Countertop Oven I bought less than a month ago. It had somehow turned itself on in the middle of the night and was efficiently cooking the aluminum foil covered sheet pan that I’d left in there from several days before, as well as scorching the plate I’d left sitting on top of the oven. The front door to the oven was scorched black, and though I didn’t wait and observe if the infrared light was cycling on and off like it does in normal operation, I can only guess that it wasn’t. It was easy enough to unplug the unit, though it took a couple hours for my heart to stop racing and for the acrid smoke that had filled the living room and kitchen to dissipate. Even now, I still get the whiff of the burnt aluminum foil, especially when we come back into the apartment.

When I first got the oven, a month or so ago, I was pretty impressed with it. It cooks with a combination of conventional heated coils and with intense white light. As a result, it doesn’t need to be pre-heated, and offers cooking times comparable to a microwave oven, but with the browning of a regular oven/broiler. I’d even given the oven a 4 star review on Amazon.

But the other night, I have no idea what happened. I’m certain that the oven wasn’t accidentally turned on by someone brushing up against it or anything. (The way the control panel is configured, it requires you to press several buttons to actually turn the thing on.) It had been several days since I’d used the oven. I do recall that when I did last use it, I had been broiling a couple pieces of bacon, and since I still hadn’t used the oven enough to get the cook times down, I turned the oven off by simply opening the door. Even still, I had set the oven to cook for merely 10 minutes, and it had gone through most of that on the bacon. So what it was doing, all by itself, in the middle of the night the other night, I’m not sure.

It looks like there was a recall on the ovens in the beginning of December due to the circuit board overheating and fire hazard. (It should also come as no surprise that according to that linked article, these ovens are made in China.) Also, according to their website, despite the name “Black & Decker” on the appliance, it’s actually a product of a company called Applica Consumer Products Incorporated. Black & Decker sold their household product line in June, 1998, along with the right to continue to use their name.

So, lessons learned — unplug appliances that can burn down your house when you’re not using them; keep the smoke alarm installed, even if it does go off every freaking time you grill a steak; and don’t buy the Black and Decker Infrawave Speed Cooking Countertop Oven, at least not until they’ve worked the bugs out.

Update: It looks like the recall I mentioned above was not for the model of oven I have. It was for the 2-slice bread toaster. At this time, B&D / Applica is offering no remedy for the problem I experienced.