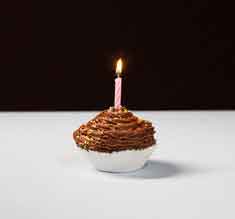 It was one year ago today that this blog was born. In that time, there have been 165 posts, or one post every 2 days, on average. The site has received 77 legitimate comments, and 743 spam comments, all of which were deleted.

The single busiest day here in the last year was April 15th, when the post about the Last Meal on the Titanic hit several huge link blogs simultaneously, and 14,408 people hit the site within 24 hours. That entry page still gets new visitors every day, and spawned two sequel entries … What the Other Classes Ate and an investigation into the elusive Waldorf Pudding.

Visitors spend, on average, 54 seconds here, reading 1.29 pages per visit. People are  likely to come here to try to figure out how to cook corn on the cob, or to make a beer batter, the two most popular search phrases. Other popular entries include my brother’s attempts to make east Texas barbecue in his backyard, and my methods for seasoning cast iron or french steel frying pans.

Here’s to Cooking Monster’s first year. Let’s hope our next year sees more beer batter and corn on the cob!