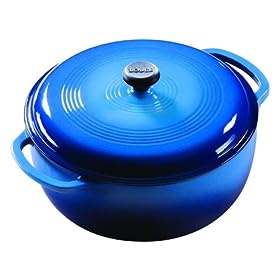 Braising is just cooking a tough bit of meat, partially submerged in a moist, flavorful liquid, for a long time, at a relatively low temperature. You wouldn’t want to try it on a tender New York strip steak, or a chicken breast. They’d just end up falling apart into nothing. But a lamb shank, or a 7-blade chuck steak, or short ribs are all pretty tough, and do well in a braise. The low-and-slow cooking method basically makes the gelatins in the meat break down, which gives the food a good mouth-feel, and has lots of flavor.

The basic technique is simple. Preheat your oven to 325°, and take your piece of meat and brown it on all sides in a little oil in a heavy dutch oven. (About 5 minutes a side usually seems to work well.) Then remove it, and pour off any darkened or discolored oil, but keep any of the meaty bits that might have stuck to the pan. Next soften vegetables in fresh oil. Onions, carrots, celery are usually a good place to start, and diced root vegetables like turnips or celeriac work well, too. Once they’ve softened, I often put in a little tomato paste for flavor, as well as garlic. Now is a good time to put any herbs in. If I want a thickened gravy at the end, I’ll toss in a couple tablespoons of flour now, too, stirring it all until I don’t see it anymore. Next is the liquid. It can be water, but wine, beer, or chicken stock will add flavor. Just enough to cover the vegetables. If you add too much, you’ll be making stew. Now heat the liquid up until it’s boiling, and return the meat to the pan. Cover tightly, and slip the pan into the oven for 3 or 4 hours, checking more frequently towards the end to make sure the liquid hasn’t boiled away. After that amount of time, the meat will be falling off the bone. I usually hold off on salting until the end, because the braise method tends to concentrate the flavors, and you can go overboard with the salt by mistake. Chances are, you’ll want to strain the gravy, because the vegetables end up being just mush. This is also the time to strain off any fat that will undoubtedly be floating on the top. (If you can spare the time, make the braise a day ahead, and refrigerate. The meat will taste even better, and you’ll be able to remove all of the congealed fat easily.)

Variations abound. I know of one recipe for braised short ribs that uses only sliced onions for the vegetables, and the liquid is a dark Belgian ale. You can also skip adding the flour, and use a hand blender, and pulverize whats left of the vegetables to thicken the gravy. And I’ve often made Alton Brown’s Good Eats Beef Stew recipe with great success, which starts with braised short ribs that does away with almost all vegetation, and a lot of the liquid, in favor of a spicy, almost bbq style paste that uses tomato paste as its base. You can also mix it up a lot by using different flavor combinations. Onions and carrots and curry powder with chicken stock would work really well with lamb shanks, I think. Red wine, carrots, and onions are the basis for the french Coq au vin. (I’ve always had a bit of an aversion to braised chicken recipes, because the skin always ends up kind of rubbery. Cooks Illustrated suggests browning chicken thighs but removing the skin before putting it back into the hot cooking liquid.)

In any case, braising is the way to go if you have time to spare, and a tough bit of meat.