I watched Jacques Pepin make chili con carne in an electric pressure cooker. I didn’t even know these things existed. I’d been contemplating purchasing a regular pressure cooker for awhile now. I added one to my Amazon shopping cart; I turned down the corner of the page in the Sur la Table catalog … but nothing pushed me over the edge until I watched this cooking show.

He just poured the dried beans into the pot right out of the bag. He added raw hamburger, and water and canned tomatoes and tomato paste and spices. He clamped on the lid, and said that he’d have chili in an hour. (I’ve snipped out just the parts where he demonstrates the chili recipe … the first video is the prep, and the second one shows him serving it. The whole episode is here.)

I looked on the internet, and saw recipes for pot roast in less than an hour. Chicken stock in 40 minutes. I read that this cooker let you brown your meat in it first without making you dirty up another pan. It also has a setting that lets you simmer the contents once the pressure is off, to keep it warm. (On re-reading the manual, it’ll cook for the allotted time, and then switch to “simmer” mode — so I guess you could set it up, let it cook, and then it’ll keep warm all day long while you were shopping or at work.) 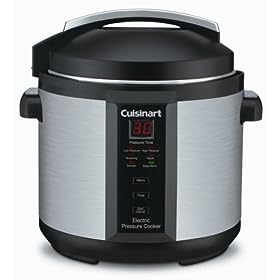 Well, of course I had to have one. I had some credit built up on Amazon, so I ordered it.

And then I re-watched the cooking show, and only then realized that the whole damn show is sponsored by Cuisinart, the people who make the electric pressure cooker. What’s more, the unsweetened chocolate he puts in is made by yet another of his sponsors. I realized I’d been bamboozled. Oh, Jacques! How could you? If anyone would resist being a infomercial pitch-man, it’d be you.

So, the cooker showed up this afternoon, and I was tempted to make dinner using it, but then I figured I should wait and try some of the recipes from the little cookbook that came with it, instead of just winging it. I don’t have much buyer’s remorse. I’m still glad I bought it, but the proof will be in the pudding.